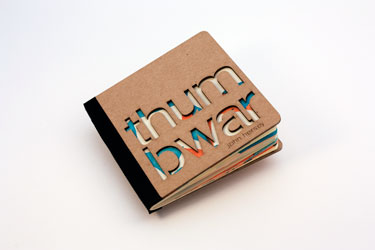 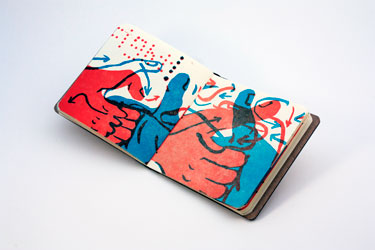 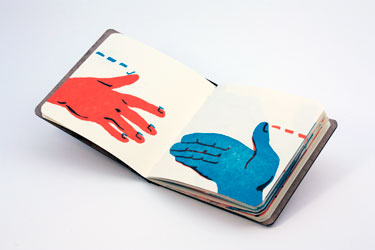 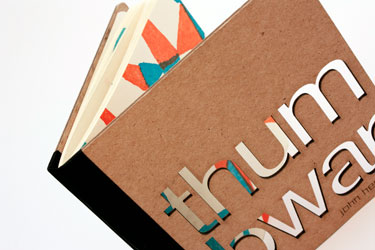 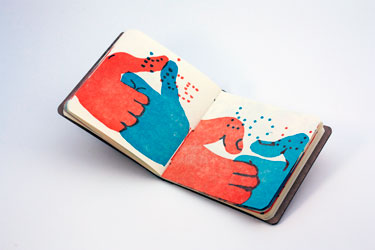 The book is hand-bound and letterpress printed in two colors using a Vandercook 4 at San Francisco Center for the Book. The covers are laser-cut into finish grade plywood, with a small number of them laser-cut into chipboard. The ancient sport of thumbwar was first recorded with pictograms on ceramics unearthed at Xanadu, the summer court of Kublai Kahn in the 13th century. Though there is earlier mention of a similar game 2000 years previous through buddhist texts where combatants engaged in zhi jue di, or toe wrestling, in a similar fashion. It is believed that Marco Polo brought the game to the West when he returned from his travels. Scholars have conjectured that the game was used to settle differences between rival officers as to who was going to sleep with the most popular concubine versus who was going to have to churn the ayrag in the morning before the great sky god awoke, but no one knows for sure.

John Sherlock Hersey is considered one of the founders of digital illustration. He is the principal of John Hersey Illustration in Larkspur, California, where his clients include Sony, Bandai, Le Monde, Wired, the Times of London, Swatch, the New York Times, Newsweek, and Benetton. John has designed watch faces for Swatch, an Absolut Vodka ad, pattern designs for Esprit, on-air IDs for Nickelodeon, font designs distributed with Emigre, and various logos including the XM satellite radio logo. He also wrote and illustrated the children's book binkobink (2002), and his work has been exhibited at SFMOMA. He studied at the Art Center College of Design in Pasadena, California. Hersey is CCA's Senior Adjunct Professor in Illustration. Visit his website here.