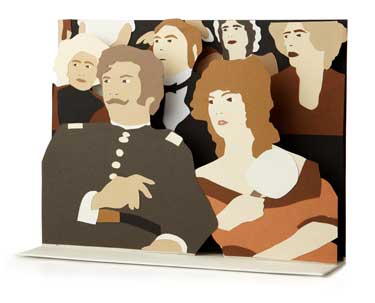 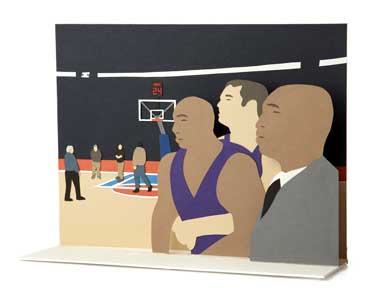 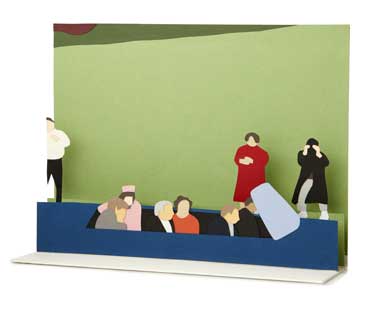 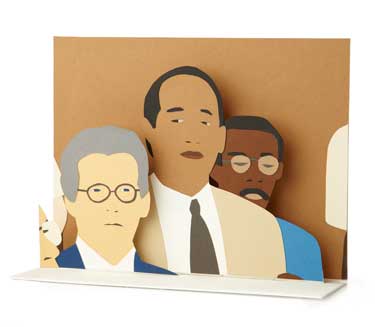 Paper Space is a 4-page pop-up book consisting of paper cut-out dioramas based on film and TV  depictions of historic events from the mid 19th century to the present. The book unfolds into a structure divided into four spaces—each housing one of the pop-up scenes.

The dioramas create a timeline of events that have disrupted and confused America’s view of itself. Page 1 shows witnesses of Abraham Lincoln’s assassination in 1865 at Ford Theatre. The second diorama re-creates John F. Kennedy’s limousine passing the grassy knoll in Dallas in 1963. Page 3 presents O.J. Simpson and his legal team awaiting the reading of his 1995 criminal trial verdict. The last diorama recreates the infamous brawl at Auburn Palace in Detroit, involving players of the Indiana Pacers, the Detroit Pistons, and fans attending the 2003 NBA game.
Each diorama is based on a still frame of a widely circulated film or TV program, while simultaneously referencing an existing animated film by Ezawa (The Unbearable Lightness of Being, 2005; The Simpson Verdict, 2002; Brawl, 2008).
Paper Space meditates on space—the space of a book, the space of a page; the book as space, flatness, and three-dimensionality. In this way, two of the most persistent illusions that surround us—time and space—form a kind of pact to create a Paper Space for history.
Each copy of this free-standing sculptural timeline was assembled by hand, and is housed in a custom hand-crafted box.

Kota Ezawa is a kind of video, film and photography archeologist unearthing animations and still images that are hidden in archival footage. His projects have taken the form of digital animations, slide projections, lightboxes, paper cutouts, intaglio etchings, ink drawings and wood sculptures. His work has been shown in solo exhibitions at Madison Square Park in NYC; Wexner Center for the Arts in Columbus, OH; St. Louis Art Museum; Artpace, San Antonio; and the Wadsworth Atheneum in Hartford. He has participated in group exhibitions at MoMA, New York ; Metropolitan Museum of Art; Andy Warhol Museum in Pittsburgh; Art Institute of Chicago; Musée d’Art Moderne de la Ville de Paris; as well as the 5th Seoul International Biennale of Media Art and the 2004 Shanghai Biennale. Kota Ezawa is an Assistant Professor at California College of the Arts and lives in San Francisco and Berlin.